The Essence of Malice 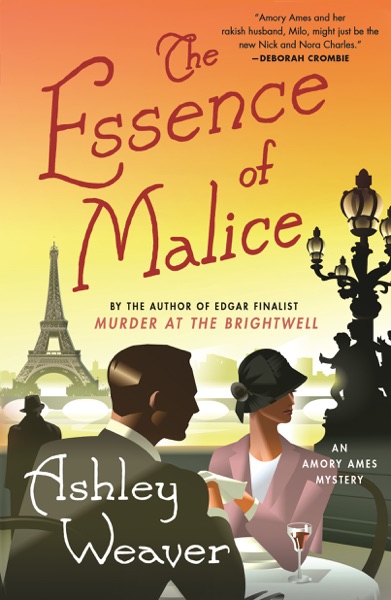 The Essence of Malice is filled with her trademark style, wit and clever plotting, sure to delight and charm traditional mystery fans.

“In this highly enjoyable and engrossing mystery, Ashley Weaver—with her sure touch for evoking elegance and glamour—wafts her appealing and determined heroine Amory into the world of perfumers, family secrets and the heady whiff of murder. I loved the evocation of scents, skilful shifts of suspicion and the satisfying conclusion.” —Frances Brody

“The scent of murder and betrayal fills the Paris air . . . The climactic surprise makes this the best of her mysteries to date.” —Kirkus Reviews

“For pity’s sake, darling, let me finish my coffee before you begin concocting schemes.”

When Amory Ames’s husband Milo receives a troubling letter from his childhood nanny, Madame Nanette, the couple travel to Paris where they become embroiled in a mystery surrounding the death of a famous parfumier. Helios Belanger died suddenly, shortly before the release of his new, highly anticipated perfume, and Madame Nanette, who works for his family, is convinced that her employer’s death was not due to natural causes.

The more Amory and Milo look into the motives of industry rivals and the Belanger heirs who are vying for control of his perfume empire, the more they are convinced that Madame Nanette may be right. When secrets unfold and things take a dangerous turn, Amory and Milo must work quickly to uncover the essence of the matter and catch a killer before the scent goes cold.

Also out now in the Amory Ames mysteries: Murder at the Brightwell, Death Wears a Mask and A Most Novel Revenge