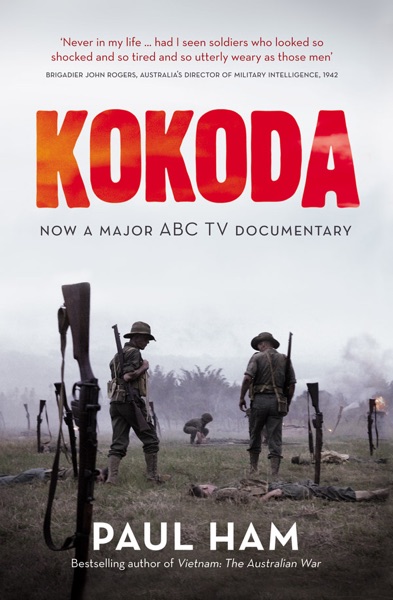 ‘Never in my life … had I seen soldiers who looked so shocked and so tired and so utterly weary as those men’ Brigadier John Rogers, Australia’s Director of Military Intelligence, 1942

In this acclaimed account, Ham describes both sides of the appalling struggle along the Kokoda Track in 1942 when a few badly trained Australian troops confronted the Imperial Japanese Army in the worst terrain imaginable.

Few of us know the true story behind that legend; few know the guts inside the myth. Kokoda was a war without mercy; a predatory war, where men hunted down men like wild animals. No army had fought in such conditions; no Allied general believed it possible.

Yet Kokoda was a vital struggle; undoubtedly a turning point in the Pacific War. Had the Japanese captured Port Moresby, Australia would surely have been bombed and cut off as the only base in the South West Pacific for the Allied counter-offensive.

The diggers were fighting for their very country’s survival as the last free nation in Asia.

Paul Ham is the author of VIETNAM: THE AUSTRALIAN WAR and the Australia correspondent for the LONDON SUNDAY TIMES. He co-wrote, co-produced and appears in the ABC’s two-part documentary based on this book, which, for the first time, took a camera crew along the full length of the KOKODA TRACK.