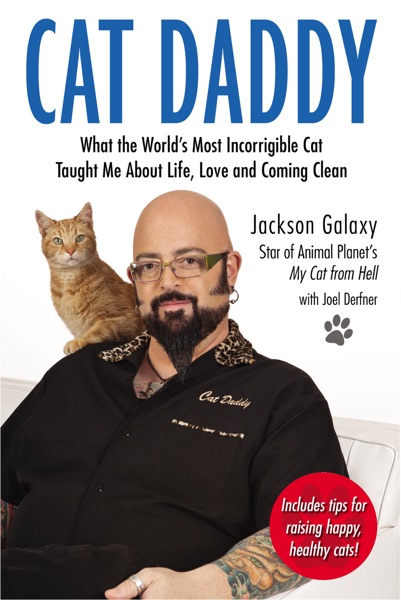 Cat behaviorist and star of Animal Planet’s hit television show My Cat from Hell, Jackson Galaxy, a.k.a. “Cat Daddy,” isn’t what you might expect for a cat expert (as The New York Times noted, with his goatee and tattoos, he “looks like a Hells Angel”). Yet Galaxy’s ability to connect with even the most troubled felines — not to mention the stressed-out humans living in their wake – is awe-inspiring. In this book, Galaxy tells the poignant story of his thirteen-year relationship with a petite gray-and-white short-haired cat named Benny, and gives singular advice for living with, caring for, and loving the feline in your home.

When Benny arrived in his life, Galaxy was a down-and-out rock musician with not too much more going on than a part-time job at an animal shelter and a drug problem. Benny’s previous owner brought the cat to the shelter in a cardboard box to give him up. Benny had seen better days — his pelvis had just been shattered by the wheels of a car — and his owner insisted he’d been “unbondable” from day one. Nothing could have been further from the truth. An inspiring account of two broken beings who fixed each other, Cat Daddy is laced throughout with Galaxy’s amazing “Cat Mojo” advice for understanding what cats need most from us humans in order to live happier, healthier lives.